Not The Way It Was Planned

This was the first night in the hospital, March 16th 2012

Surviving is what it feels like we are doing most days. Trying to figure out where we go from here or just to make it through the day. I miss my partner in day-to-day decisions. I miss being able to vent to him, sit with him, being loved by him. I just miss him. So when people ask how we are doing…I say surviving. Not trying to be dramatic but that is how it feels. How do you go through the past year and not feel like that?

Tomorrow I go back to work. I hope that I can stomach working there again especially after what happened last year with my job. They made me resign because I ran out of personal time when Justin died. They have no heart…plain and simple. I am a number to them. I am not looking forward to going back and seeing the sympathetic faces, the questions and yes for some being the subject of gossip. Someone tried to give me some counseling information then it turned into a cancer “pissing” match it felt like. ONE life taken by cancer is too much. As she sat there and told me about how 10 years ago she lost her husband and how sad her grown ADULT children where I could only think of Brock, our 3 month old BABY that lost his father. Like I said one loss is no greater than another. Why can’t we just support each other? Heartache is just heartache. 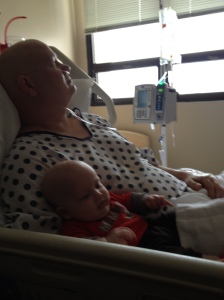 We went and saw the movie Timothy Green today…I had no idea the children from the garden would go back to the garden or die. In the movie he knew all along that he would be leaving but told no one because they would only be sad. Did Justin do this? Did he knew? We had very few conversations about death. With Justin he was always about self motivation and mentally preparing himself for whatever the challenge would be. He did say once about Brock being here because he wouldn’t be. How cancer had forever changed him. 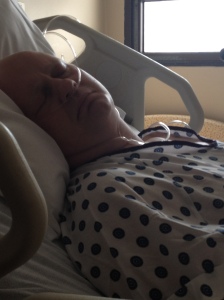 Justin sleeping. The expression on his face is explanation enough as to how bad he felt, heartbreaking. He felt so bad that day he didn’t even know we left.

Justin messaged me that he slept but he is scared. He didn’t realize he was so sick. Neither of us did. Even at this time we still were living in a world were cancer was not going to take him from us. He was on day 2 in the hospital. They had done a lung biopsy to determine if this was true pneumonia or chemo induced. It was chemo induced. He needed steroids and time for his lungs to heal. Time would run out. He would die 2 weeks later.

Our last night together in the regular rooms. We watched mindless television laying in his bed.

This was the last time Justin would ever be conscious. He was moved down to ICU. It was late that evening. He had a central line placed in his chest earlier that day because his arms had began to swell…we thought due to the steroids they were giving him. It was more than liking from the MASSIVE amounts of blood clots he had formed. He was laying the bed, I was next to him laying next to him. He was stroking my hair. We were talking about our future and planting a garden. How the kids could help. I felt like my chest was about to explode our sweet baby boy had missed nursing that evening. Moments like that seem so dream like now. We BOTH should have been home with our baby boy, not laying in an ICU hospital bed together. Life is just not fair. We were both falling asleep he told me to go home, he was okay. I asked if he was sure. He said yes, go hun as he rubbed the back of my head. I kissed his forehead and said goodbye.

That was the last thing HE ever said to anyone, the last person HE touched. I am so thankful I was that person.

He was incubated hours later when his oxygen level plummeted and he never regained consciousness.

Did Justin know? Did he not say anything because he knew I would be sad? In some ways now I think he did.

This picture is what it looking like to hold on to hope and a prayer in your heart all the while in your head know what is coming.

A lot of things transpired in the next week that still at times feel unbelievable. Eventually I will get to all of them, in time but things are still so fresh and selfishly I do not want to share them yet either, they are mine. I want Brock to know every detail one day of how hard his Daddy fought to live. I have signed for things I never believed I would have too. I became his advocate when he could not speak any longer. He would have done the same. I feel like I have lived a hundred years in this past year but there also seems to be so much life still in front of me but where do I go?

“What doesn’t kill you makes you stronger.”

I HATE this saying. HATE it! I know people say it out of genuine emotion and trying to be up lifting but I hate it. Once someone said this to Justin and he replied back that he couldn’t tell if the events of the past year were making him stronger or killing him. It killed him. HATE the saying….period!

I still find cough drop wrappers by the bed at times, they are still in our diaper bag. His box of Kleenex are still in the car. Some of the gauze used after they checked his blood sugars until his fingers were raw I carry in my pocket at times still. I smell his deodorant daily. The perfume he gave me I wear sparingly so I don’t run out. I found his chap stick the other day. As I placed the open tube to my lips I just cried for him…it is the closest I will ever get to feeling his lips on mine again here on earth. Surviving…

These things are so precious but hurt so deeply.

I had a dream about him. In the dream we were having a conversation….I was surprised to see him. I asked him how he felt, he said “wonderful!” I asked him if he sees how big Brock is getting…he said all the time. It is just not fair. So for now I must continue to get up each day and survive without him. When he died there was no confusion on how we felt towards each other, what our future was going to be like. I wish we would have had the chance and not just feel like I have to survive.

How I remember my love.

Posted by slw1878 in Uncategorized