Not The Way It Was Planned

That first week of Chemo was a busy one. He was in treatment everyday for at least 8 hours a day and I had two doctors appointments…one with our high risk doctor on Tuesday and another with my regular OB on Friday. Overall we had a normal pregnancy except for me having gestational diabetes which is why I saw someone other than my OB. At my doctor’s appointment that Tuesday Brock had decided to decrease his movements and pretty much not move AT ALL! It felt like that appointment went on forever! It was either he needed to move or I was going to the hospital to have him that day. While I was laying in one recliner connected to a fetal movement machine Justin was across the street in a recliner connect to an IV, that we hoped was saving his life. I was scared…what if they say I have to deliver right now??? I cannot do that alone, I need Justin. Not a day goes by that thought still goes through my head…I need him here!

Again, calmly Justin said to relax…everything would be ok. The past week they had pushed my c-section back another week because of availability at the hospital. I cried…I was ready to have this baby! I felt HUGE and I was SO swollen! He calmed me then too…

Thank goodness Brock decided to move and they let me leave the office but Dr. Rowe said I would be having a baby by Christmas not on the date they had me scheduled…December 30th. I drove over to chemo to sit with Justin and bring him lunch. When I walked in Pam, the oncology nurse said I guess you all will be having a baby anytime now. I nodded to her. How is this my life…sitting with the man I love at chemo pregnant. Who envisions this happening in their life??? We talked for a few minutes, then we both fell asleep in the chemo recliners.

Wednesday I finished my Christmas shopping…not sure of how much time I had left to get the last-minute things done. I took Justin, my love his lunch and stayed for a bit then went to work. I was exhausted.

Thursday was the usual work, sit with Justin, eat lunch…a normal day at chemo. He seemed to be tolerating it well for the most part we felt. He wasnt sick…yet. The only side effect he had been experiencing was the metallic taste in his mouth which the lemon heads and sour patch kids I brought him helped with. We ate Jason’s deli everyday that week…tomato basil soup and turkey sandwiches. That evening our families were going out to eat together with his sister…should be a nice evening and a reason to celebrate. Justin was almost done with week one of his treatments!

We went to eat at nice restaurant. I felt like an Easter egg in a dress with my huge round belly. He said I looked beautiful. While sitting at dinner I was getting so uncomfortable…by this time of the day I was usually stretched out. Brock was pressing his behind into my ribs SO hard and I was having a ton of Braxton hicks…or so I thought they were Braxton hicks. Justing leaned over and asked if I was getting ready to go that he was getting uncomfortable in his jeans from his incision. We were the walking wounded the two of us. I said yes and that when we get into the car I have to take my tights off…they are just too “tight!” He said he needed to unbutton his pants. Again, we had to of looked ridiculous! So as we rode with my parents I took my tights off and he unbuttoned his pants. I began to feel sick and immediately needed to vomit. No where to pull over it happened in the car…all I could think of what a nice expensive dinner I just threw up!

Back at home resting on the couch together now in our monkey pajamas I felt a weird “thump” and sat up. I looked at him and said that I had a weird feeling from inside my stomach. Justin suggested it was just the baby and he was probably moving around now that he could. I wasnt so sure, it didn’t feel like movement. I went downstairs to the restroom…I peed and peed and peed. It wouldn’t stop! I walked to the kitchen and then there was a puddle at my feet. I yelled for Justing to come downstairs…I motioned to my feet and asked him what was going on, what was all of this water! He looked at me confused too. You would think with this being our 7th baby we would have known! Neither of us had experienced this though!

I called my doctor, fixed my hair and makeup and off the hospital we went. Justin was driving like a crazy person…flashers and all. He made the car fly into the emergency room bay…the same bay we had gone too back in October for his swollen leg. He ran inside to get a wheelchair. I could walk for goodness sake! I walked around the car closing the door he left open…silly man! While he parked the car I made a puddle in the ER waiting room, embarrassing! On our way up to labor and delivery I began to think maybe I just peed all over myself…this cannot be really happening! When we arrived at the front desk I told them just that…I thought I had just wet my pants apologetically. They suggested since we were already there they wanted to check. Okay, I agreed. As we started to the room a huge GUSH of fluid began to flow from me…it went EVERYWHERE! My clothes were soaked…shirt, pants, shoes…everything! It was then I realized I had not just used the restroom…we were having this baby I tonight!

After I was all hooked up to monitors and an IV they wanted to wait a few hours since I had just ate. Brock’s heart rate was dipping every time I had a contraction…it was time to have him. I remember them wheeling me back to the operating room. Justin came in and was sitting beside my head…stroking my hair. He knew I was scared. I wanted this part over with.

The whole time I was pregnant Justin and I had debated on where our baby would have hair. My two kids had a ton of hair at birth and his 4 were completely bald. The debate was about to be settled!

At 12:29am Brock Donahue Phillips came screaming into this world. He weighed  6lbs 12ozs and was 20inchs long. 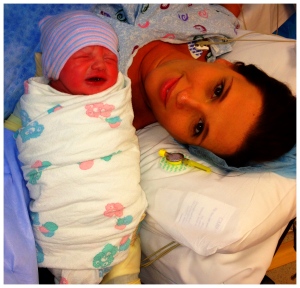 I remember hearing Brock cry and then Justin cry out loudly…He is BALD! He is BALD Stacey…he is beautiful. We looked at each other and both just cried. In the middle of all the hard, bad times we had experienced over the past months here was this miracle born to us. He was perfect and such a sign of blessing to come. I will never forget how Justin sounded that night. I love my bald baby…he looked just like his daddy!

Back in the labor and delivery room we both laid down to sleep until we could have Brock with us a short time later. The nurse brought me a very angry little man when she wheeled Brock in…he was hungry. I remember her taking his clothes off and putting his under my gown…skin to skin. He latched on and nursed and stole my heart. I looked up to see Justin watching us with tears running down his face..he said we looked beautiful.

The sun came up and it was time for Justin to go…he had to go chemo. It was so unfair but I knew he had to go. He held Brock and he started to cry, he said he did not want to go. He walked across the street to his chemo treatment.

Brock could not have timed it better for us. He made sure his daddy was there when he was born. Any other time of the day and it might not have been possible. It all happened so quickly if Justin had been at treatment there might not have been time for him to make it. He also was here for Christmas this year, his only Christmas with his Daddy.  This is one of those times where I do not cry because it is over but smile because it happened. Justin was there for Brock’s birth…he got to see our bald little baby come into this world. I am so thankful that I had Justin with me that day, we carried each other through the hardest times of our lives. I feel him carrying me now, still…there is just no other explination.

Posted by slw1878 in Uncategorized